Centralia Park Board meets for planning

They did not waste time on small-talk. Kinkead addressed the group, saying the golf course was one of the main topics, as well as 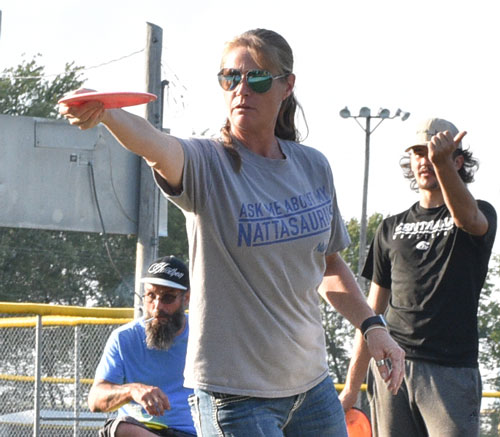 Disc golf at the Centralia Parks

Bennett began with golf course pricing, adding a youth 11 and under price, “to make it really cheap for them to come out.” He also mentioned an April through October range pass, at $100 for that age group.

He said he examined other course’ membership fees. He also said he hoped to keep all price changes for at least two years.

Asking from the audience, Landon

Magley asked if the family membership included children, Bennett said it did. “Yes. For our members that’s a pretty good deal.”

Green fees, he said, would be significantly under Arthur Hills. “I would like to have a 27-hole fee that we would only use Monday, Thursday and Friday.

He also said he was concerned with people who “Paid for nine and played 18.”

Thursday, Friday Saturday and Sunday evenings after 5 p.m., may feature some specials to encourage play during those time.

“Chemicals and labor is going to horrible, this year,” Kinkead said, responding to a question from Hulen.

The board unanimously approved the new fees.

They addressed other golf course projects. Bennett said they were limited by time and money, which he said would mandate hiring temporary help for golf course superintendent Kurt Pemberton.

It would include a lot of turf care, such as poking and aerating, changing the grass on the greens “We are not going to strip the greens, but every time we cut and aerate, we will put down new seed… more attention to crab grass and goose grass.”

He also mentioned improving the fairways, including their irrigation, establish a chipping area so there is no chipping on the putting green.

Bennett said they also need an aerator and a new tractor-loader combination. He said they would be adding gasoline-powered carts to the course’ fleet.

Long-term, bridge repairs, lengthening some of the blue tees, possible bunker additions, “These are things people are asking for” Bennett said. He also mentioned replacing the asphalt in the parking lot, a cart-path on the fifth hole and new shed doors. “And enhancing the challenge of the course.”

Next, they addressed the parks.

“First thing we want to do is continue replacing the Ash trees,” he said that would be partially funded by a TRIM grant. The majority of that would be at the main recreation park. He also listed a back nine for the disc golf course and repainting the shed at Jaycee Park.

Possible electric enhancements for holiday displays, would be done in partnership with the city, he said. That would include turning the tennis court into a secure display for Christmas.

He also mentioned replacing picnic tables and benches at Bicentennial Park and rebuilding and elevating the shelter there. Related projects included running water lines to the east and west ball fields for providing water at the east field, eventually including a bathroom, as well as irrigating both outfields. Raising the west field is also on Bennett’s list.

Other items included : * enhance the skate park, *work on parking and traffic flow at Bicentennial Park, * replace shelter tables at Jaycee park, add a water fountain at the ball diamond, * add a water line to the recreation park’s field, * a walking trail, which could be city-wide, incorporating the recreation park, he said a grant might be able to fund new sidewalks for the city, where the sidewalks were part of the walking trail, “I think that would be used every day,” Bennett said. “It makes every part of the park more accessible, the kids don’t have to ride down Howard Burton to get to the pool.” He said the tennis courts also need to be addressed. Bennett said the tennis court surface is at least 20 years old.

Regarding the rec center, goals included a game for the game room and a piece of new cardio exercise equipment, paint the activity room and around the track, mini-blinds or tinting the windows in the Rec Center gym, Bennett recommended tinting the windows. The board approved him having two of the windows that produce the most glare tinted to see how it works. Bennett said he would submit estimated first.

He also recommended adding another “Max Rack,” for the weight-lifting area.

Then they discussed the pool. He there as a large valve that feed the filtration pit, “It has to be replaced or we will not be able to open the pool. This has to be done, the pool has to open.” “The pool will not run without the whole thing being replaced,” Kinkead said, adding it may be time to replace the whole filtration system.” Bennet said the pool would also be repainted, and a containment wall for chemical storage.

Kinkead said he had homework for r the board, “go through the list and decide what you want for the short-, medium- and long-term goals… It will help us prioritize what the board wants and what the people we talk to want… It will help us put out some goals.” He said golf-course specific fundraisers would enable the park budget to be used in other parts of the system.

“The big thing is for us to draw a strategic plan for what we want to do,” Bennett said, “we are not locked into anything.”