‘It was just supervisor heavy’

A 25-member audience of Centralia Kiwanians got to hear an update on the state of the Centralia Police Department, courtesy of its new chief Harlan Hatton.

Hatton has completed his first five weeks on the job. 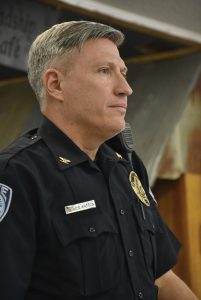 He began his discussion by dispelling a rumor.

“Despite what a lot of people thought, I had not really sought this position, before I tried,” Hatton said. “It kind of took me by surprise a little bit. A couple people asked to put in for it before I did.”

Hatton stressed his administration was interested in moving the department forward, not dwelling on the past.

Uniforms and radio equipment were two of the items he said needed upgrades.

Using his connections built up during 21 years with the Columbia Police Department, he has already made some strides getting new radios for the officers.

“Having connections in Columbia… I was able to get some radios. They gave me some radios that are anywhere from four- to seven-years newer than the ones we were operating with.” He said they are worth approximately $2,000 each and obtaining them will give Centralia more time to arrange the funding for more up-to-date radio equipment.

Regarding uniforms and other items, Hatton said the board of aldermen, mayor and city administrator have been, “Really good about allowing me to spend money to have a good positive image in the public. I want the citizens to know our police officers are police officers. We were able to secure money for uniforms, we are getting all new duty gear… Anything that makes the job more comfortable, I say if it keeps them professional-looking, let them wear it.”

Soon, he said he department may be considering new equipment for departmental vehicles.”

He said the police department building will eventually need replacement, “but these things take time and money and we don’t necessarily have a lot of either.”

Within a week, Hatton said, the department should, once again, be fully staffed, with the final full-time spot filled. When asked what defined “fully-staffed,” he said, “Nine plus me.” He clarified that number does not include dispatchers or the code enforcement officer, adding he prefers a complete roster of full-time officers rather than relying on part-time officers.

The conversation returned to dispatching later in the talk when somebody asked about the difference between the CPD’s four full-time dispatchers and those who worked in Boone County joint communications for the BCSD. “I don’t think most people realize what our dispatchers and our other civilian employees do for the police department. They’re not only answering telephone calls from citizens, they’re also running license plate checks. They’re also running background checks. They’re also checking for warrants and handling paperwork associated with an arrest.”

He said dispatchers for Columbian, Boone County and other large agencies have separate records officers and departments. “We don’t. Our dispatchers are also records people. They handle more than radio calls. They handle records as well… And I cannot believe the volume of calls about dogs and cats we get in this town. I cannot believe how many lost dogs there are in this town.”

Taking other questions from the audience, he said he had a good relationship with the Boone County Sheriff’s Department and Boone County Sheriff Dwayne Carey. He said the last of the officers the BCSD had loaned Centralia during the department’s leadership transition had returned to the sheriff’s department.

He said he has changed the department’s administrative structure.

“When I came to the department there was a chief, a lieutenant, a sergeant and a corporal. That’s four people who have management over eight or nine people. That just doesn’t make sense to me.” He has eliminated the lieutenant position and assigned a supervisor responsibility over a squad of officers to each of two sergeants. “Just two supervisors and the people under them… It was just supervisor heavy.”

Regarding community policing, he said CPD officers “would be out of their cars and talking to people. “We’ll try to rebuild an image of the Centralia Police Department with the citizens as well as with other law enforcement agencies in the county and adjoining counties.”