An audience of 10 started the December 13 meeting of the Centralia School Board with a moment of silence in honor of Brian Schmidt and Ken Thall.

Subsequently they stepped into a discussion with Boone County Commissioner Janet Thompson regarding certain recent Boone County Department of Health and Senior Services decisions regarding food served at school events and their concession stands. “The more handling that goes into it, the more preparation, the more possibility of public health issues,” she said. “For decades we’ve been ignoring 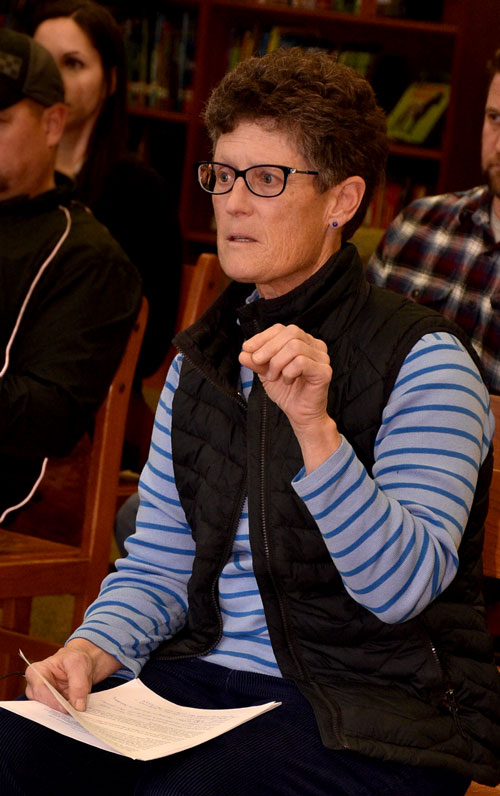 it, but it is becoming more and more the norm for school concession stands to be preparing food instead of just offering pre-packaged chips and stuff.”

Depending on how long such an establishment is open, it becomes more like a restaurant, which the department regulates. The discussion included a fee the district, $100, might need to pay the health department.

“That has not been our experience,” said Nathan Chitwood, school board member. In essence she said if the concession stands are not serving the foods the department considers “risky,” they are not food establishments and the district does not have to pay the health department fee.

Thompson said the implementation would be delayed until spring, “they want people to understand it before they crank it up.”

“This is just more red tape we have to jump through,” said Jared Auck, “It is frustrating, that we have to pay the $100 first, then serve it.”

Thompson corrected him. “No, you pay the $100 and you get inspected… That’s what we’re supposed to do, maintain some degree of safety.”

Chitwood said he was concerned that the district and other schools had no input in the making of that decision.

Steven Chancellor, Centralia R-VI superintendent said he would like to be invited to commission meetings when education-related topics are discussed. He said from the district’s viewpoint, whenever the “Columbia district gets in trouble, all the other districts pay for it instead of just dealing with Columbia…As a personal favor when you speak to these groups about school issues, please include me… It would go a long way if they would do some of that outreach…There’s value in listening, there’s value in getting other perspectives.”

Thompson   agreed that it would be important for the County Commission to hear a “non-Columbia-centric point of view.”

There was one person who addressed the board during public comment, Dwain Shelton, a member of the district’s facility committee. “I want you to know you have the community support on a lot of that stuff. It’s important to get the boots on the ground and get started… We need to get behind him. A lot of it is very obvious and needs to be done.” He said it seemed that in the last 10 years the district board has not been listening to the community and not maintaining the districts’ facilities, “instead just bandaging things.”

“Our financial position continues to be incredibly strong, especially when you compare it to previous years,” Chancellor said. He said tax revenues should greatly increase by the time of the next meeting.

He said they had spent approximately 51 percent of the supplies/consumables budget, which he said meant “we are right on track.”

During his board report, Chancellor discussed the Centralia Educational Foundation.

Jeanne Auck gave a presentation on the foundation’s activities, she discussed the five grant applications they are funding this year. “Our long-term vision for this is to set up a long-term endowment fund that can fund itself… supporting and enhancing our students’ educational experience, including teachers coming up with new and innovative educational ideas and projects for us to fund.”

She said they are planning a March 19 fundraising gala at the new Knights of Columbus building on Route B.

Chancellor spoke on the strategic plan process. For more on that, see a future issue of the Centralia Fireside Guard. He said they needed to secure an architect soon and interviews should begin at the beginning of the year. “We need assistance in site development in master planning so that we are not doing things haphazardly… More of a five-year road map, ideally a 30-year roadmap.”

He also said waterline replacement bids at CES and HVAC bids at CHS were awarded Monday, Dec. 13 and are ready to begin work over winter break.

have so far registered for the two open seats, The deadline is 5 p.m., December 28.

“We have achieved some things other districts have not been able to do,” Chancellor said. “It’s been a really good semester.”

They also unanimously, minus Harvey Million who was absent, approved the annual audit.

They discussed what they put on the April Ballot. Chancellor said they could go as high as $10 million without increasing the current tax rate. He said there was a mechanism to make it as high as $11 million.

“I say go get the bids,” board member Rusty Dutton regarding the summer projects list.