Centralia defeated Sullivan 53-30 Friday night at Mexico High School. The match was back and forth as the two teams were tied at 12 and again at 24. 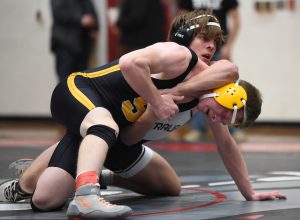 With three matches remaining Sullivan trailed the Panthers 35-30. In the 195 pound match Ian Tuggle was down 15-5 to Sullivan’s Jordan Rice when with three seconds left in the final period he pinned him to extend Centralia’s lead to 41-30. Payton Mabrey and Seth Hasekamp pinned their opponents for the 53-30 victory. 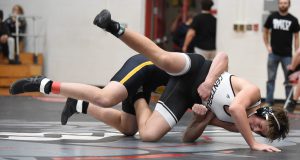 Ian Tuggle was worked over in the 195 match with Sullivan. Trailing 15-5 he pinned his opponent with three seconds left in the third period.

The nightcap against Mexico was a little tighter. Brayden Dubes started things off with a pin at 120, but the Bulldogs reeled off four straight wins to take a 22-6 lead. Ethan Adams pinned his opponent at 152, but the Panthers and the Bulldogs flip-flopped wins with Mexico leading 31-18. Tuggle came from behind in the third period again, trailing 11-6 before making the pin with 33 seconds left, cutting the score to 31-24. Mexico got another pin and Centralia added six points when Mexico didn’t have a 285 wrestler. Bryson Dubes got a pin at 106 cutting Mexico’s lead to 37-36. In the final match, Westin Ward took a hard fought 6-1 decision at 113 to propel the Panthers to the 39-27 win. 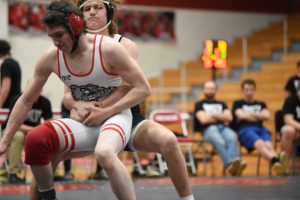 Ethan Adams locks up a Mexico wrestler during their 152 match. 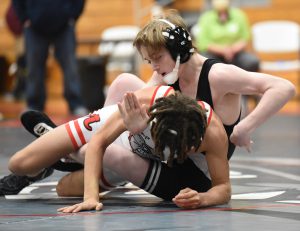 Weston Ward gave Centralia the win against Mexico with a 6-1 decision at 113. 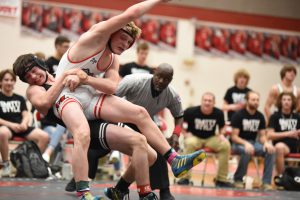 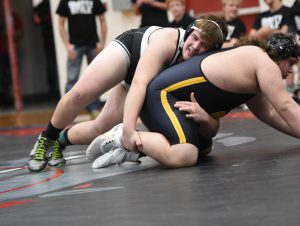 Seth Hasekamp caps off the scoring in the 53-20 win against Sullivan.