At least 30 people attended the January 19 meeting of the Hallsville R-IV School Board.

While there were only three votes taken, discussions were had and at least three significant decisions made.

• Approved the ballot language for the upcoming school board election.

• Changed the language mandating when they would require students to wear masks to school as part of the district’s COVID-19 precautions.

• Agreed to formally address the question of implementing a four-day school week during their February board meeting.

District spokesman Kari Yeagy explained the change in COVID policy. She said it means “Removal of language regarding required face coverings for students and staff if more than two percent of a building’s population are positive with COVID at any single point in time.”

Regarding the ballot issue, these are the candidates on the ballot for the April school board election: Shaunna Turner, Bryan Joseph Wildenhain, Lori Wheeler and Benjamin S. Dawson 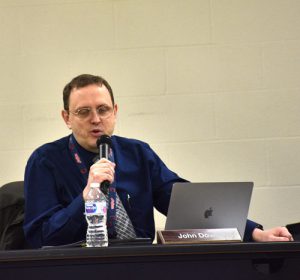 Hallsville R-IV Superintendent John Downs discussing challenges faced by the staff and thanking them. Listen below.

Before diving into what became the main event of the evening, R-IV Superintendent John Downs asked the audience to “please show appreciation to every school employee you encounter in the next few weeks and months due to the challenges of the pandemic.” Elaborating on that, he said the district is facing a critical issue regarding the shortage of support staff and substitutes.

Most the meeting centered on public comment regarding the adoption of a 4-day school week and board-members’ responses.

At least four people spoke on the issue, with only one less than wholly supportive of the change.

Vanessa Plummer was less in favor of the change than the rest of the speakers. She began by mentioning discussion that took place during the district’s December board meeting.

“Several shared that teachers need and deserve another day off because they are stressed.  The world is stressed and frankly, that doesn’t justify a 4-day school week. After reaching out on this topic the reason for a 4-day school week was changed to trying to combat a teacher shortage and a 4-day work week will give us an edge on attracting and retaining good teachers since pay is low.

“Columbia seems to be the biggest stealer of teachers, pays $4550 more than Hallsville, plus full insurance,” Plummer said. “Aside from the Columbia School District, Hallsville does have competitive salaries and has the highest staff increase rates of all the schools I mentioned.”

She said if the district wanted to compete with Columbia for teachers, they had to do it with the district’s environment: “Rural setting, small school population and let’s be honest, our teachers are not breaking up fights daily or taking away weapons.  We are also in a great situation with the number of houses going in behind the school.  The tax on that land when it was agricultural didn’t even break a thousand dollars.  Now each house is looking to contribute around $2000 in tax dollars.”

Then Plummer asked the audience if they knew that “Hallsville has the highest number of teacher days worked and specifically, the highest number of PLC days than any of those schools I mentioned?  That can absolutely be changed to reduce the number of days teachers work without changing salaries.  North Callaway works 21 days less than Hallsville, South Callaway 11 days less, Fulton eight, Southern Boone and Centralia both nine less.  All without four-day school weeks. Why not change that calendar?”

She concluded by asking the board to use data to make its decision and look at all other means to attract and retain good teachers.

The board also heard from Leigh Pemberton, a school district interventionist.

She began with: “Data and research are not the same things. Data is numbers-based, black and white scores. I look at the students’ scores and decide what and how to group them for academic support every day based on the most up-to-date research methods. Research based, no matter how you look at it, is still done through opinions. I have researched the 4-day week and found the same ‘statement’ used for and against it in many different sights. We collected data and polled our Hallsville families, Hallsville students, Hallsville staff, and Hallsville administrators.”

She shared data from the last time the four-day calendar was voted on, as well as most recent data. In that survey, she said majorities of families, free and reduced lunch-receiving families, students, administrators and staff responded in favor of a four-day week. The only demographic that did not, she said, was the school board.

The most recent survey, she said, showed 80 percent of the respondents preferred a four-day week with longer days, doors opening at 7:40 a.m., class starting – 7:50 a.m. and dismissal at the main campus at 3:35 p.m.

She said 15 percent of the respondents wanted to retain the traditional five-day school week.

Regarding board-suggested methods to retain and recruit teachers, Pemberton said: “This is great but they are looking from the outside in.”

The board also heard from Yuliya Manad, who said she was a middle school parent concerned regarding measures to protect the students from COVID-19. “You had more students sick with COVID today. What do you think of that… Masks do work.” She asked the district to employ more social distancing, “I just ask what you are doing to protect children from COVID.” She warned of post-COVID effects from the disease that are still being studied by the University of Missouri. “I want to hear what you are doing…” Board President Jon Bequette said John Downs, R-IV superintendent would contact her.

Board member Shanda Nichols asked if they were trying to continue social distancing.

Downs said they were trying to maintain social cohorts, thus limiting transmission outside of small groups. “we do not have the physical space to keep students six-feet apart from each other.” He said they are applying social distancing when they can, for example limiting lunch seating to four students to a table.”

Nichols said if they were not using masks, then it should not be in the district plan. “But looking at the number out, when are we going virtual… How many current teachers do we have out and is it worth shutting down for a few days.”

Downs said he and the principals are monitoring the situation closely, daily. “Our intention is keep the students in seat. We planned to close a building only we did not have sufficient staff in that building.” Saying they only have closed one building, that was the standard they were still using. He said it was an imperfect solution, but better than closing the school district. “Being here is better than not being here… This is an imperfect situation, but we will come out on the other side.”

He said the district had sent an email to parents warning the situation could change and have a backup plan in case the district did have to shut down.

Downs also said parents were notified in instances of their children having close contact with somebody who had positive for COVID-19. Downs said one issue is that some staffers who test positive are “quite ill and others are asymptomatic…10 days or sooner than that if they have documentation from a medical doctor saying they are no longer contagious,” Downs said of one of the quarantine changes about which they would vote that night. Bequette said the change was based on CDC recommendations.