An audience of eight sat in for the Centralia aldermen’s Public works and Public Utilities and Public Safety and General Government committee meetings.

A lot of ground was moved, especially regarding the ongoing city waste water basin project.

Regarding he waste water project, Gary Davis, the project manager for Bartlett and West said there were significant supply-chain problems. “And, they need the water and you want to get rid of the water,” he said of the farmers using the city’s processed waste water for irrigation. 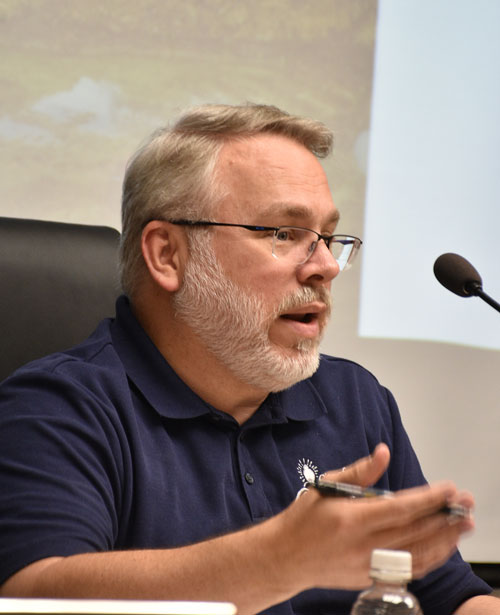 “We will not have enough budget to complete this project, we have about $30,000 left and that is not enough.” He also said they were having “issues at the basins and issues with the supply chain.”

He said part of the problem is the DNR will not allow them to comingle the funds between the wastewater and drinking water projects., which include four large earthen basins one of which is described as “continuous problem… We’re struggling still with this location… this one problem area continues to soften up.”

“In your mind, why are we running over at this point,” Centralia Mayor Chris Cox asked. “Help me understand that… Is this something that should have been remedied a long time ago?”

One corner of that fourth, the lower basin, Davis said, is constantly drawing in water.

1 – Abandon the problem-basin. “Grade it, sow it in grass and forget it.”

2 — Build it, compact the material, test it and consider it complete “let them build it per speck, and pray that it holds.” In response to a question from Ward I’s Donnie Rodgers, he said the berm would fail if it did not hold compaction.

3 – Ask Terracon to designate a new location for the berm, which has already been relocated once Rodgers said. “And it was already half the size it started out,” Forsee said. Ward III Alderman Landon Magley said there should have been more study regarding the soil before the project was started. He also objected to using Terracon again, because they were authors of the initial project design. “The first time, you could see water boiling out of the ground and he said it was good… In my mind somebody else should be responsible for paying for the project. Sow it in grass and forget it.”

4 – Dig a trench around the wet area of the current basin, fill it with bentonite clay and a second trench filled with rock to help the drainage.

Magley said another option was to keep digging in the berm area to reach below the are from which the water is encroaching.

Cox echoed Magley, asking why that was not done in the first place. “This is starting to get concerning financially… We are going to have to make sure we are protected moving forward for the City of Centralia… The bottom line is we need to get this recommendation from them.”

Forsee later said that part of the project the fourth basin, had cost the city approximately $160,000.

Davis said if it was his home town he would ask Terracon to do the research and find a place for the berm that was “100 percent safe.”

Forsee said his concern there was the basin has already been reduced 50 percent and Davis’ recommendation would cost the city another 25 percent capacity.

“The city of Centralia is going to continue to grow,” Cox said in response to a suggestion to completely abandon the basin.

The aldermen voted, approving minus Ward I’s David Wilkins, on Fischer Grading’s request for an extension into the summer, at least June.

“We were a little dissatisfied with the good faith effort we were seeing,” Cox said when asking Rusch how much work Fischer Grading was doing on the project.

Rusch said since then “The effort was completely there.”

Hudson asked for specifics regarding the timing and contingency. Fischer said that was a “loaded question.”

Fischer said if there were no problems, he would be within three days of completing the lower, problematic, basin.

Magley also said the change order lacked target dates, which the aldermen had previously requested. “You are asking for another extension, we haven’t got what we want, the street goes both ways… We have asked for that and aint received it.”

When Fischer said he had not heard the request, Hudson said, “You were sitting right there when we asked.”

“It frustrates me… That aggravates me,” Cox said. “You guys have stepped up and really made an effort, but there was a lack of attention, that frustrates me. We’ve got to hammer out how to get to the finish line from here.”

Hudson returned to getting a work schedule from Fischer. “Right now, it’s a black hole, you are asking for 75 more days. Right now, we are flying blind… We are still not on the same page.”

After Fischer agreed to provide a schedule and continue to commit to the same level of resources they board had seen in the last few weeks, the aldermen then agreed to the change order.

He discussed a saving on purchasing concrete pipe for new sewer lines to run in front of Centralia High School. City administrator Heather Russell said the approximately $60,000 savings would be used for other water and sewer projects.

Cox said the project would eliminate some of the ditches in front of CHS, improving road and pedestrian safety.

“I don’t think we have a product that will work for us long-term,” Mike Forsee, director of public works and public utilities regarding malfunctions with the city water department’s slaker. A slaker, which could be described as an industrial-sized water softener. The city’s current one seems to be wearing out its internal heaters, and none have functioned long enough to merit its warranty. None have lasted six months.

Water Department Foreman Matt Rusch brought up the topic of new mobile pumps for the water basins and the possibility of the farmer-partners paying part of the cost.

In other business they reviewed the annual water-quality report, “nothing has changed,” Forsee said.

They discussed the police and fire department reports during the Public Safety and General Government committee meeting.

They also discussed using ARPA funds to only partially demolish the Centralia Community Golf Course clubhouse, keeping and refurbishing the “fireplace room,” and adding to it.