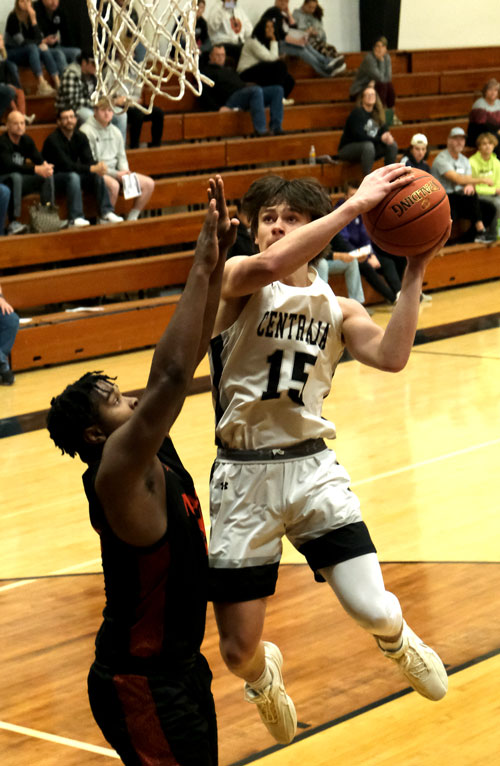 Noah Kropf was the early leader for the Panthers with 7 of the opening quarter points.

Two and a half minutes into the second quarter Macon had evened the score at 14 and then went on a 14 to 2 run ending the half with a 34 to 20 lead over the home squad.
Again charging from the gates in the third Cullen Bennett got an early 3-pointer and another field goal while teammates Boen Zimmerman and Logan Rosenfelder each had layup scores.
After a Centralia time out, Macon took command to finish the third with an 18 point lead. Centralia fell 41-60 with Cullen Bennett being the only double digit scorer at 13.
Hallsville would take the floor in the last game of the night against Boonville.
Kolton Garner had 5 points in the first half as the Indians would trail 19-30 at halftime. Xavier Stinson stepped up in the third scoring 8 points while Isaac Stinson scored 5 as the Indians battled back to a 39-44 score to start the fourth.
Moving to the final period in a tight 53-55 game with 1:24 left to play, Stinson committed a hard foul and a technical foul while both teams were in the double bonus.
This sent Boonville to shoot four free throws and get the ball back. Boonville struggled going 5 of 18 from the free throw line in the fourth. Jackson Johns for the Pirates was able to get 3 of the last 4 attempts to fall, squeaking out a victory over the Indians 62 to 57. Kolton Garner led Hallsville scoring with 13, Xavier Stinson 12 and Isaac Stinson 11.
The evening’s scores were: