A new opportunity has yielded a new business.

And its product sounds like 100 hummingbirds after they’ve drained an industrial-sized coffee urn.

Taylor Moreland, founder of Moreland Seed has opened a new business that is putting him, and Centralia, on the national map.

Agri Spray Drones came to be because Moreland found himself spending lots of unexpected and unbudgeted time acting as an intermediary between his farm-chemical customers and their applicator professionals, he said.

“I wanted to help,” he said “and was not comfortable being the middle man. I was helping my customers deal with delays, applicator availability and other issues. After a lot of research, I began testing sprayer drones in 2019 and we incorporated Agri Sprayer Drones in 2020. Then I spent at least an entire summer testing a new model sprayer drone, then we decided it was time to start looking at sales.” The initial tests were done with plots owned by select seed-customers of Moreland’s. 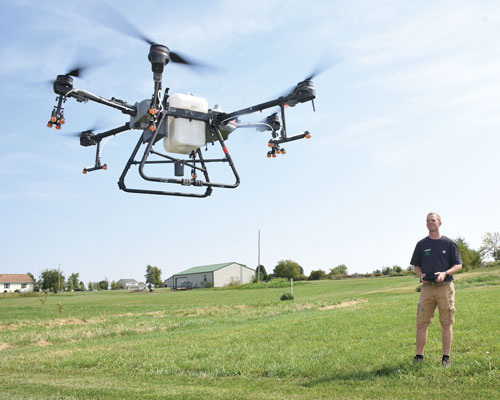 Taylor Moreland piloting one of his firms’ sprayer drones

At that time, there were very few agriculture-related drone manufacturers in the United States.

“The ones that did, did not seem to have any understanding of agriculture,” Moreland said, adding they did not really seem to have a grasp of the applications needed.

Eventually they found what they needed in China, where sprayer-drones had been used for ag-chemical applications for more than a decade. “You had farmers, the average family farm there is 10 acres, a lot under five, there treating one-to 10-acre plots using backpack sprayers, they can’t afford anything else,” Moreland said. “They developed the concept there, it was a huge increase in efficiency to save money through more efficient use of chemicals and to help farmers avoid exposure to atomized pesticide. It was a huge increase in safety too.”

His first year, he sold around 70 sprayer drones. Then, in the winter of 2021, Moreland and his 10-member staff upgraded to the largest sprayer drone available in the U.S., the T-20 which has an eight-gallon capacity. So far this year, they have more than 300 sprayer drones.

The drones are 80 pounds of carbon fiber, plastic and aluminum technology, equipped with four electronic motors powered by a 52-volt 29,000 milliampere battery, guided by a five-pound, hand-held wireless controller.

“Since then we have upgraded and sold more than 300 of the Agris T-30,” he said. “So we’ve become the largest sprayer-drone distributer in the US over the past 19 months.”

Moreland said a company, the Agri Spray Drones business model is centered on empowering rural communities through the creation of opportunities that create the revenue streams needed for small agricultural businesses to grow and the next generation to return to the family farm.

“Drones are an opportunity for Missouri farmers, and I appreciate what Taylor and his crew at Agri Spray Drones are doing,” said Agri Spray Drones customer, Tom Stuart. “Bringing the drone into my operation has enabled me to do my own fungicide and fertilizers over my corn without having to hire an airplane or helicopter. The drone gives me more opportunities to get it done more affordably since I’m doing it myself. I’ve also been able to do the same thing, foliar and fungicide, on my beans and wheat, and I probably wouldn’t have if all that application expense had to come out of my pocket.”

Moreland said the company will soon be purchasing a new warehouse in Boonville to expand its capabilities and could be doubling its employee roster within the next year.