Gary Wayne Maiden was born April 28, 1952, in Columbia, MO to George Robert Maiden and Jewell Pauline Hathman Maiden.  He moved to his eternal home with Jesus Tuesday, May 10, 2022. Services are under the direction of Oliver Funeral Home. Visitation will be from 1p.m. to 4 p.m.  at Perche Baptist Church, Clark, MO, on Saturday, May 14, 2022. His Masonic service will be at Perche Church on Sunday, May 15th at 2 p.m. followed by regular services with burial in Perche Cemetery. 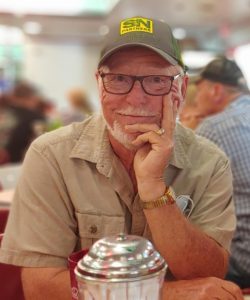 When his dad had a call to fix a water leak after hours, Gary would ride along. After graduating from Harrisburg School in 1970 he too went to work for the city of Columbia as a coal passer at the city power plant. After 6 months he moved to the Water and Light Department as a meter reader. Through the 42 years with the city he moved up the ladder to Services Superintendent, overseeing meter reading, tree trimming, service workers and dusk-to-dawn lighting operations. He retired from the City of Columbia in May 2012. Gary enjoyed working for the City of Columbia.  Cliff Robertson was his boss for many years.  The employees were like family.  They would work together, and then a few times a year they would party together.  He served many years on the Columbia Credit Union board.

Gary enjoyed dancing, being a referee of basketball games, and hunting in his younger years.  He also enjoyed fishing, whistling, farming, vacation time, and being with his family and grandchildren Alexis, Keegan, Autumn, Lydia and Willow. Vacations always included taking the grandkids.

Gary was a member of Perche Baptist Church and had served 29 years as a deacon. He was also a Mason belonging first to the Harrisburg Lodge then to the Cooper Lodge #36 in Boonville. After being diagnosed with Pancreatic Cancer, he would tell people he was in a win, win situation.  If he beat the cancer, he would have more time to enjoy loved ones and friends.  If he didn’t beat the cancer, he would be living in his eternal home in heaven!

In lieu of flowers, donations can be made to Perche Cemetery Association Working Fund.