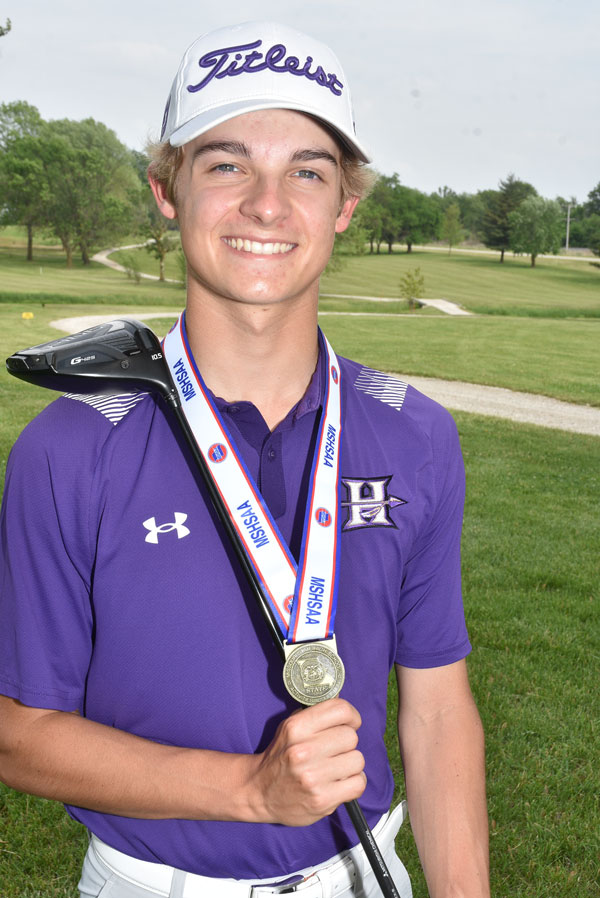 . “‘Yes, last year I got through the window,” he said smiling at the memory.

This year he is the state champion finishing the 36-hole state championship course at the Columbia Country Club with 144 strokes, 71 on the first round, 73 on the second.

When asked how different if felt to be there this year he simply said, “different, better.”

Cox said he felt stronger this year, in both his mental and physical games.

“Down to the stretch it was tough but I managed to make a birdie and the other kid managed a bogey so we tied for first place,” he told the Centralia Fireside Guard while getting ready to play a few holes at the Centralia Community Golf Course. It was cool to get birdie on the last hole and secure the win.”

The key to his success Cox said was “Hard work pays off.”

What does the state golf championship champion do for the summer after golf after high school golf?

“More golf,” Cox said, adding that he considered Centralia his home course. “I’m up here pretty much every day for the school golf, but during the summer I play at Columbia Country club.”

What would  you say is the difference between a state champion and other high school golfers?

“The amount of time you put in,” Cox said,  “Time on the course, time with the private coaches and trainers or anything. Danny Dollens of Centralia is always working with me. He is a short game genius which is a very good good skill to have if  you want to be a champion.”

Toughest moments of the tournament:

“The rough is thick at Columba Country Club.  I had a handful of really difficult lies that presented some challenges and frustration.  The wind was up a bit more on day two as well which created another factor to the round.  All in all, it was a great test and I’m proud of my performance.”