Larry Wayne Megown, 82, passed away peacefully on 9.23.22 at his home in Columbia, MO surrounded by his loving wife and family.  Larry was born the third of four children in Centralia, MO, and from a young age, had both drive and goals.  He loved being outdoors hunting & fishing and excelled in all kinds of sports.  While a middle school student, he saw his first airplane and secretly set his sights on one day flying those big machines.  After a very successful high school football career, Larry played for the University of Missouri scoring the only touchdown for the Freshman team.  He completed his football career at William Jewell College in Liberty, MO where he met the love of his life, Kaye Cokely. 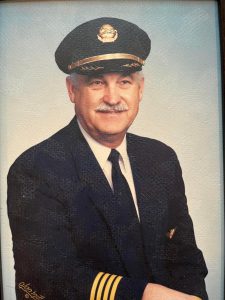 After their marriage in September 1961, the birth of their eldest daughter in July 1962, and graduation in May 1963, Larry started a teaching and coaching position at North Kansas City high school.  It was during this time that he began to realize his lifelong dream of becoming a pilot.  In between coaching commitments, he started flight school at night.  About a year after the birth of his son in July 1965, he started working for Trans World Airlines.  After two quick years as a Flight Engineer, and the birth of his youngest daughter, Larry was promoted to Co-Pilot.  In 1977, he was honored with the Trans World Award of Excellence and celebrated with his wife and other honorees in Paris, France.  During his TWA career, he moved the family to a small farm, where he taught his children to care for their horses, cows, bees, and a substantial garden.  And was very active in the local community including Platte Woods United Methodist Church, Boy Scouts of America, and 4H.

Larry retired from TWA as a Captain in 1996, and began the second half of his life, as the Captain of their sailboat and RV.  Larry and Kaye enjoyed many adventures aboard their sailboat, in the British Virgin Islands and local lakes. In 2004, Larry & Kaye sold their farm with most of their belongings, to become full-time RV’ers traveling many miles visiting all 50 states, Canada, and Mexico, and several NASCAR events in their RV home.  After spending the summer in Alaska, Larry & Kaye moved into their favorite lake house in Hot Springs Village, AR, where they were able to boat, kayak, swim, golf, dance, and enjoy family and new friends!  Shortly after arriving in Hot Springs, Larry learned he had prostate cancer which he was able to manage for 15 years.  In 2019, Larry & Kaye moved back to mid-Missouri to be closer to family when his cancer began to spread.  In partnership with his medical team, the spread of his prostate cancer was controlled; although another quick-moving cancer was not able to be stopped.  Larry spent the last few months of his life in his home cared for by his wife and children.  Together, with extended family, they shared their stories, pictures, videos, jokes, and all the wonderful memories from over the years.

Larry loved life (and fly fishing)…  he was a good man, a good husband, father, brother, uncle, coach, and friend to many, but to all, he was a teacher.  He taught us all how to be better in all that we do.  Fly free Larry – you are missed.  A Celebration of Life will be held on Saturday 10/8 at 2 pm at the chapel in Lenoir Woods, Columbia, MO.  In lieu of flowers, donations can be made to Tunnels To Towers Foundation (https://t2t.org/) or St. Jude Children’s hospital.

Arrangements are under the direction of Parker-Millard Funeral Service & Crematory, 12 E. Ash St., Columbia, MO 65203 (573) 449-4153. Condolences may be left online for the family at www.parkermillard.com