Not everyone is a Tiger fan

The conversation could start in many places.

At the July 26 evening meeting at the Mexico Knights of Columbus Hall, representatives of the Tiger Connector power line project met with landowners and other interested parties for a conversation on power lines.

For Charles Cunningham, who along with his brother Jim, farms 300 acres or so north of Centralia, the conversation starts about a letter from Invenergy, the company that purchased the Grain Belt Express in 2020, regarding a possible 100-foot wide easement through his property to permit an approximately 40-mile-long, 345 kilovolt AC power line to pass through on its way to the McCredie Substation in Callaway County.

The power line is called the Tiger Connector.

The line would be supported by power poles, between 120 and 160-feet tall, approximately 800 feet apart. According to an Invenergy handout each power pole would have a five-foot diameter footprint. 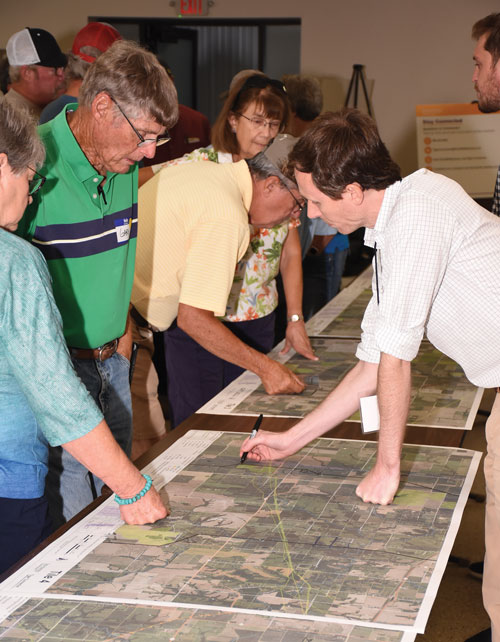 “I do not like it at all,” Cunningham said regarding the prospect.

When asked why, he said, “Well they do not communicate with people, the farmers, the landowners, they don’t tell you what all is going to happen, what’s going to happen to our phone service, our internet service.”

Cunningham said while he and others would be compensated for their property, “What is compensation for your farmland, compensation without choice?”

Cunningham said the Invenergy representatives tried to answer he and his wife Julie’s questions. “I talked to a few of them, yes, they tried… They can’t answer questions that they don’t know. I live north of Centralia. My internet service is US Cellular and US Cellular telephone. What’s it going to do to our communication? What’s it going to do to our communication with our fire department out there? They don’t know, they say it will be just the same as a little power line running through, but I don’t trust that.”

For the complete article, see next week’s edition of the Centralia Fireside Guard