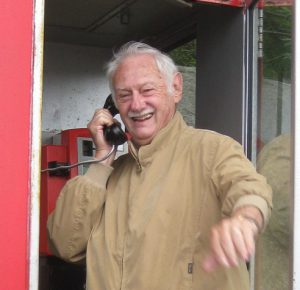 Centralia native, Merle graduated from Centralia High School in 1951.  After attending Westminster College he enlisted in the U.S. Air Force. Following his service he completed his bachelor’s degree at the University of Missouri, Columbia. In Columbia he managed a coin machine business, became part owner of the Italian Village Restaurant, and subsequently founded Restaurant Equipment and Supply Company which he owned and operated until his retirement in 1999.  For many years he maintained the Tipps Tool Building in Centralia as a warehouse for the business.   He served as chairman of the Boone County Horse Show, President of the Columbia Ski Club, and was active in the Flatland Ski Association.

For 15 years of his retirement, Merle and wife Bev lived in Mexico where he was an active volunteer with Cruz Roja and Operation Feed. He was a member of the Guadalajara Stamp Club the Lake Chapala Society Computer Club, the Tequilla Club and the Culinary Arts Society of Ajijic.

In Texas Merle was a member of The Houston Chowhounds, The Quiet Birdmen (an aviation club), as well as 3 stamp clubs. He was also a McAllen Public Library Bookstore volunteer.

He loved good food and good friends. He struck up conversations often and easily with strangers as well as with friends and acquaintances, and never chanced upon a place, a subject, or a person that didn’t interest him. He was keen on Missouri history, snow skiing, and philately—collecting, buying, and selling postage stamps nearly his entire life. He had a special interest in the history of Boone County, and most of all Miller County, where the Wright family came from, and made many contributions of items and information to the Missouri Historical Society.

An informal celebration of life will be held in Columbia at a later date.  Memorial Contributions may be made to the Centralia Museum, 319 E Sneed St., Centralia, MO., 65240 or the Boone County History and Cultural Center, 3801 Ponderosa St., Columbia, MO., 65201.