Pastor Hee Jin was born and raised in South Korea and has had God’s call in her adolescence.

Gods call, came to her through friendship and music.

Her calling and education brought her to the United States of America, she said, speaking with the Fireside Guard while attending her first Riggs Union Church Mutton and Beef dinner, the Riggs church’s annual fundraising dinner.

She recounted a time when she was around 11 years old and her family was facing challenges and one of her friends wanted to help. “She said to me, “Hee Jin, why don’t we go to church together. Because I know you love music and we can sing together like in choir.’ I thought OK, I want to go there.”

Music has always been important to her, she said, and if she were not a preacher, she thinks she might have worked in some part of the music business. “But the seed of the call is always in our heart. You cannot avoid it. I think I would have ended up in church anyway. 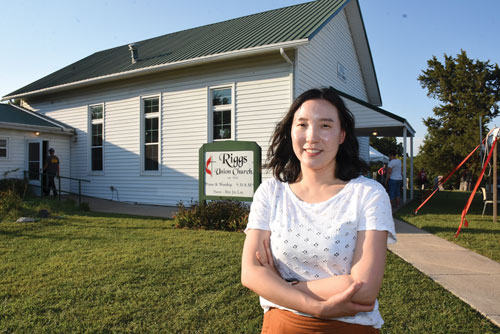 So she started attending church with her friend. “I was kind of an anxious child… My church provided many kinds of friends and teachers who preached spirituality, especially God’s Love. So that led me to choose seminary school.”

That was because, Jin said of her first experience with church, “I had received God’s love from them and I wanted to share it with others.”

That, she said, was the beginning of her journey to become the pastor of Sturgeon Methodist and Riggs Union churches.

She had served children and youth ministry in Methodist churches while attending Methodist Theological University in South Korea for her Masters of Divinity degree. She came to the US to study for another master’s degree in spiritual care in 2009 at Claremont School of Theology in California. After ministries in diverse settings, pastor Hee Jin studied at Candler School of Theology at Emory University in Georgia for her doctoral work (Doctor of Theology), graduated this May, and started her local pastoral ministry in United Methodist Church (Riggs Union Church and Sturgeon United Methodist in July.

The initial move from South Korea to California was not as disorienting some might have expected, she said.

“California has a lot, a big Asian and Korean population,” Jin said. “It was OK to be there, a very supportive community, but definitely some cultural shock, of course language differences and of course my whole life was in South Korea… and now I am here.”

One of her ministries between California and George was working as a 2012 stint as chaplain in a Hartford Connecticut hospital. “That was more of a culture shock, there were no Asian or Korean populations where I was, to that was a bit of a culture shock.”

Afterward she got her Doctorate in Theology at Emory.

One could say she pursued it in search of unifying theory.

Continuing her education is part of what she said a pastor should do. “I think a pastor should always be studying,” Jin said. “Every day, that’s what I believe, to understand our experiences.”

Meanwhile, how does a South Korean divinity Ph. D. holder go from the graduation ceremony at Emory Georgia to the neighbourhood of Sturgeon and Riggs Missouri.

On the lighter food, she loves spicy noodles, what she describes as “spicy ramen noodles.”

She said she does not have hobbies in the normal sense of the word, but one of her favorite pastimes is “walking in nature,” which is one of the reasons she is very appreciative of the picturesque rural campus of the Riggs Church. “But I don’t like bugs, but I love nature anyhow, and doing exercise.”

Jin discussed a question on the minds of many pastors, how to help churches grow.

She said she is still getting to know the Sturgeon-Riggs area and its people, but has a few thoughts.

That is why she said many of her sermons, at their cores, focus on how to apply God’s word to everyday life. “That is the key to my sermons how we take care of, live, everyday life as God’s children. That is my core value as a pastor, but I am still learning.”