Voting is about to become a little less casual.

A new voting law is in effect for all Missouri voters. Per a news release from Boone County Clerk Brianna Lennon, voters that 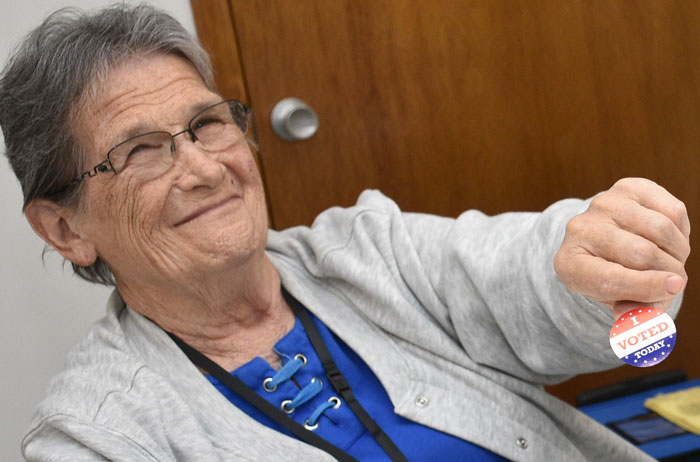 Veteran Thompson poll worker Lena Dollens displaying one of the 112 stickers she handed out to Thompson’s voters Tuesday.

cast a ballot in person at their polling place or during absentee voting will need to show a photo ID issued by the state of Missouri or federal government. Examples include a Missouri driver’s license, Missouri non-driver’s license, a U.S. passport, or military ID. If a voter does not have one of these IDs, they can still vote a blue provisional ballot, which will be counted if their signature matches the signature on their voter registration record.

For voters that cannot make it to their polling place on Election Day, absentee voting starts today for the November 8th General Election. Eligible voters can come to the Boone County Clerk’s Office, 801 E. Walnut, Room 236, to cast an absentee ballot. Voters must bring a photo ID, such as a Missouri driver’s license, passport, or military ID, to vote in person.

Lennon said her biggest concerns about the new law were that “It does not confuse voters and does not discourage voters from turning out.”

To request a mailed absentee ballot, applications are online at vote.boonemo.org or voters may contact the Clerk’s office to have an application mailed to them. A photo ID is not needed for mail absentee voting.

For the full article, see this week’s edition of the Centralia Fireside Guard.