Mass of Christian Burial will be held 11:00 am, Friday, August 19, 2022 at Holy Spirit Catholic Church in Centralia, with Fr. I.C. Medina officiating.  Interment with full military honors will follow in the Glendale Memorial Gardens in Centralia.

The Rosary will be led by Knights of Columbus at 4:30pm Thursday at the funeral home. 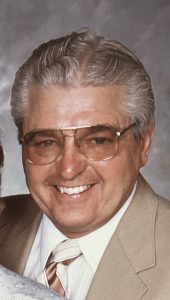 Richard was a member of Holy Spirit Catholic Church, Knights of Columbus, and American Legion.  Mr. Prenger served in the US Navy during World War II. In late 1959, he moved his young family to Centralia to pursue a dream of opening a grocery store. He became a successful businessman and supportive community member.  Above all else, he treasured his family.  Until his last days, he was still teasing and pestering his great-grandchildren, just like he did with the previous generation. The “little ones” always put a smile on his face.  He leaves a legacy of his strong Catholic faith, love of family, and his desire to serve his community with love, kindness, and grace. As he always said, “It’s a great life.”

Memorial donations are suggested to Holy Spirit Catholic Church for Memorial Masses, or Knights of Columbus of Centralia, or the Centralia VFW Post 6276, and may be sent in care of Fenton-Kendrick Funeral Home 104 S. Collier St. Centralia, MO 65240.

Online condolences may be left a www.fentonkendrickfh.com