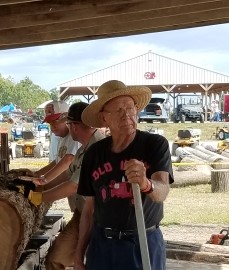 Roy was born September 11, 1930 near Washington, MO, one of nine children to Earl and Carrie Yeager Koirtyohann. In 1948 he graduated from Washington High School as Valedictorian. He worked through college on an ROTC Scholarship and was commissioned as 2nd Lieutenant in the US Army during the Korean War. He earned his Bachelor’s Degree, Masters, and Ph.D. all from the University of Missouri; taking time between degrees to work for the Nuclear Reactors in Oak Ridge, TN. After earning his PH.D. he taught Chemistry at the University of Missouri for over 30 years, eventually serving as Chairmen of the department. Roy and Laura traveled the world to Chemistry conferences and conventions and were joined by many lifelong friends in that profession. He was Scout Master for Boy Scout troop 3 for many years.

After Roy retired he started 2 new careers. The first was gardening, or should we say growing a huge garden to supply as many as possible with the bounty. Grandson Edward learned a lot about gardening from Gramps! The second was his love and passion for old tractors, sawmills, and tinkering with equipment.

He was a 35+ year member of the MO River Valley Steam Engine Association, where he operated the saw mill at their shows and also served as treasurer and president in the club.

He became known as “The Sawing Professor’’ ! Roy and Laura could be found heading down the highway in their motorhome every weekend to communities all throughout the state, as well as heading out to other national and international Steam Engine and tractor shows. They had a fabulous retirement living their best life.

In addition to all of the above, he was blessed with three greathunting dogs, Fairy, Joe, and Britt. He made quail hunting a ritual and was also enthusiastic about getting at least one deer every year. He made a deer roast on the grill that would make you throw rocks at beef. He and Laura enjoyed the farm they retired on and could be found enjoying golf cart rides to look for deer and just enjoying the outdoors.

He is survived by his wife of 70 years, Laura Koirtyohann; children, Steve (Julie) Koirtyohann, Linda Koirtyohann, and Carrie Koirtyohann all of Hallsville; grandson Edward Clevenger, and honorary grandson Shawn Atkins; many nieces & nephews, and a loving extended family. He was preceded in death by his parents, 5 brothers, and 3 sisters.

Condolences and fond memories may be shared at