The Centralia Fireside Guard is reviving one of its own traditions.

Starting this year, the newspaper is once again choosing its “Fireside Guard Mother of the Year.”

Stacey Million, mother of five, grandmother of three is the 2022 FSG Mother of the Year.” 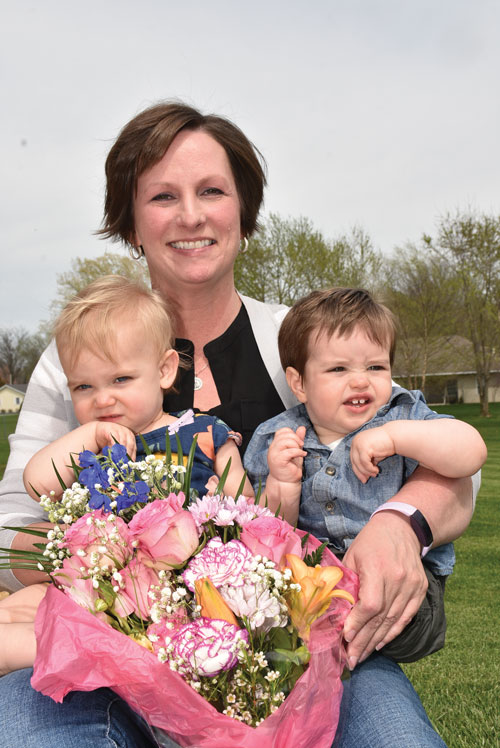 Stacey Million, the Centralia Fireside Guard’s 2022 Mother of the Year with Adeline and Isaac. two of her three grandchildren. Flowers compliments of In Full Bloom.

Besides raising she and her husband Harvey’s children, Million, as school counselor at Centralia Intermediate School has been a positive influence on hundreds, if not thousands of children in the Centralia School District.

Prior to her work at CIS, she held a similar position at Centralia’s Chance Elementary School.

“We are very lucky to have her here,” Jason Lea, CIS principal said of Million. “She does an outstanding job with the students.”

Lea said Million sees each CIS student at least once a week, between sessions and her counseling class. “She is really rock-solid on what she does. She is always a professional and always willing to help out when needed. Kids truly enjoy interacting with her.”

She also makes herself available to help, work with parents, Lea said, and is an active participant in the school district’s partnership with the Boone County Mental Health Coalition.

She said if she were not a school counselor, “I would have liked to run an on-site parenting program for women who deliver babies while in prison.”

Million said that, to her, Mother’s Day is about the love between a mother and a child. Growing up with her parents, Bud and Milly Smith, Million said Mother’s Day was always about finding the perfect flower or plant to give to her mother. “Now, with my own children, it’s always a time for new plants and getting together with my family.” A large part of her voyage through motherhood has had to do with the love and support she received from both her family and the family of her husband, Harvey.

“How have I made it work?” she responded when asked how she managed the challenges of being a mother of five while becoming a successful educator. “I was lucky to have plenty of family close by,” she said. “That meant a lot of support and help with the kids. My mother-in-law, Louise Million, was always there to help with the kids while I was going to work or to classes. She babysat, fed lunches, potty-trained and all that. I never had to worry about whether or not my kids were being loved or well treated. My parents were there too for things like doctor and dentist appointments, etc… I don’t think we ever had more than two babysitters who weren’t family. I appreciated my mother more once I had children of my own. I realized how much of herself she gave to her children and how much love she had for my siblings and me and, later on, for our children.”

With that, Million said her perception of motherhood has changed as she raised her children, and perhaps mellowed a bit. She also said though that being a mother has not changed that much for her over the last few decades.

“I don’t think the basics of mothering changed from my first child to my fifth but I definitely mellowed over time and I don’t worry about all of the little things the way I used to.”

“No parent is perfect.,” she said. “My advice to young mothers is to take care of yourself and your relationship with your significant other. Love your kids, teach them right from wrong, pray with and for them and enjoy every step of the way.”