Members of the Sturgeon R-V Board of Education met at the district’s Patton St. Campus November 16.

That came courtesy of Mike Jacoby, chairman of the Sturgeon Planning and Zoning Commission. Jacoby discussed with the board the possibility of relocating the electric poles on the south side of SHS. According to the board’s draft minutes, “a new subdivision is planned for the property at Fairgrounds Road and Francis Street. The developer would like to relocate the power lines running through the middle of the property.” The topic was tabled until the board’s December meeting.

They also heard from Amy Watson an auditor with the Gerding, Korte & Chitwood firm. Watson said the district ended the fiscal year with a fund balance of 53.97 percent up from the previous year’s 43.1 percent. Watson said there were no material weaknesses, non-compliance issues, or significant deficiencies found. She and the board did discuss the district’s need for further segregation of financial duties. According to the district has received that finding before and continues to address it by cross training staff.

The board voted 6-0 to accept the audit, minus Ken Ladyman, who was absent.

In another financially-related voted, they unanimously vote to add a no-tax increase bond measure to the April 4, 2023 ballot.

Regarding that ballot, the terms of three board members expire next year, Misty Doss, Dean Jones and Freedom Pollard.

Board members received administrative reports from the elementary, middle and high school principals.

According to her report, SHS has 31 freshmen enrolled, 41 sophomores, 30 juniors and 31 seniors with an overall attendance of 92.88 percent

Boyd also presented the elementary school report, which included announcing Developmental Reading Assessment testing for grades kindergarten through second would be held before winter break and afterward for grades three through five. 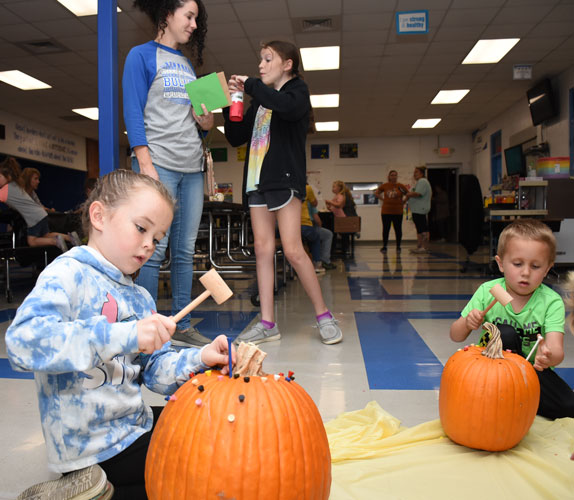 Pumpkin pounding at the Sturgeon R-V Title One night.

Boyd also said the Daughters of the American Revolution gave a donation of $500 to purchase books for students Kindergarten through 5th grade.

He said electrical upgrades for the Vo-ag shop are on hold until Meyer Electric has all the parts.

“The high school gym is in good condition with the only need/recommendation being the installation of safety straps on the folding basketball goals.  The middle school gym has several needs/recommendations which include upgrading the end cap rails to four-inch spacing to meet code requirements, installing handrails in the aisles of the older north wall bleachers, replacing worn or damaged bleacher hardware, and inspection/service of the six basketball goal standards.” He said the repairs will cost approximately $18,000

He also said Franklin had successfully applied for a Department of Elementary and Secondary Education grant funding a new steam and serving table for the K-8 cafeteria.

He also discussed a fire alarm system inspection. The results of the inspection, conducted in October indicate work is needed. “One significant item was the high school Fire Communication Panel was unable to establish a communication line to outside agencies in the event of an alarm.  The lack of a dedicated phone line for the panel was determined to be the contributing factor.” He said he has solicited a bid from Tech Electronics to repair the situation.

He concluded by saying the district is still in the market for additional bus drivers. He said they need a minimum of three more, a route driver, an activity trip driver and a substitute driver. He concluded by saying: “Under our current driver shortage, impacts to regular AM/PM routes, future activity and away sporting events are likely. Please spread the word any way you can.”